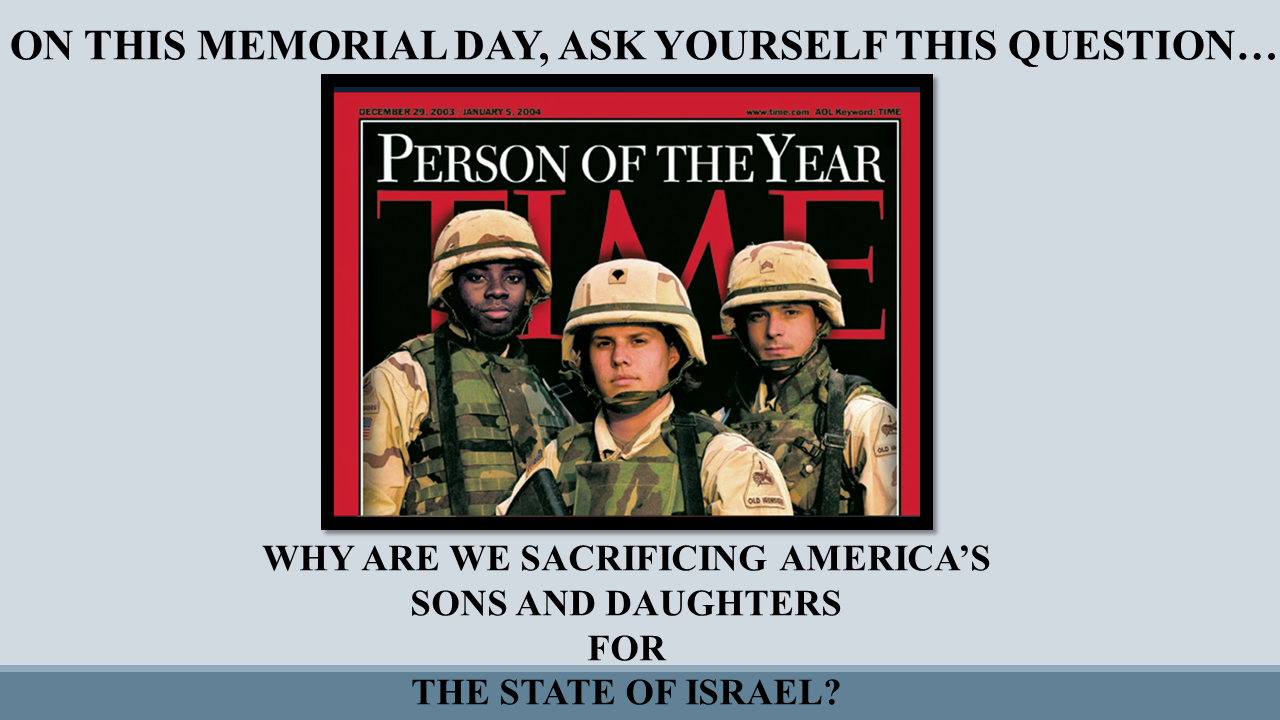 N/A by N/A is licensed under N/A N/A
Today is Memorial Day, a day to celebrate and remember the American soldiers who fought and died for our freedom.  So, I got to thinking...

It's because we have been lied to AND it's because many of you reading this today are too cowardly to look beyond the propaganda.  But, I digress...

The title of this article is, "Why Are America's Sons and Daughters Dying for the 'State of Israel'", so allow me to elaborate.  We have countless American soldiers involved in wars in middle eastern countries.  These soldiers are losing their limbs, their minds and their lives.  Supposedly, these men and women are sacrificing themselves so that we can be free here in America.  Huh?  How does what happens in Syria or Iraq impact me here in Massachusetts?  The simple answer is that it doesn't, unless of course you consider the plan for 'Greater Israel'.  But, I digress yet again.

The question to you is, "Have you ever really asked yourself why America is involved in middle east wars?"  I bet that if you have, your quick answer is, "Yeah.  We were attacked by Muslims on 9/11."  Again, that is a bold-faced lie.  The truth is that the State of Israel played a HUGE role in the 9/11 attacks, along with our own Government, not some kidney-diseased man living in the caves of Afghanistan.

Of note, Americans dying in support of the State of Israel goes back further than 9/11.  But, that's for another article.  Here goes...

Listen to Benjamin Netanyahu, in his owns words, tell the interviewer how in his 1995 book, he said, "If the west doesn't wake up to the suicidal nature of Militant Islam, the next thing you'll see is Militant Islamists bringing down the World Trade Center."  Wow!  BiBi must be clairvoyant!

Listen to this 2006 interview for yourself:

Now, ask yourself this, "How did Netanyahu know this would happen?"  Better still, how did Benjamin Netanyahu know that a 350 ton bomb was used to bring down the World Trade Center?  And, I bet you never knew about building 7...

Listen to this 9-13-01 Benjamin Netanyahu interview for yourself:

Now, let's talk about the Mossad, Israel's CIA.  Listen to this 2010 commentary from Dr. Alan Sabrowsky:

There is so much information on the internet regarding the State of Israel's involvement in the 9/11 murders of innocent people.  I have spent hundreds of hours researching this subject because up until about two years ago, I thought that Muslims were responsible for 9/11.  I have since learned that this is NOT true.  You just have to know where to find the information.

Here, Benjamin Netanyahu is quoted regarding how 9/11 "benefited Israel":

Finally, it's up to you.  Do you want to continue celebrating the deaths of American soldiers who have perished in the last twenty years for the State of Israel all the while pretending that "they died for our freedom"?  Or, are you going to speak up and take action against those who are making $$$$$$$$$ off of the deaths of America's sons and daughters?

Watch this clip and ask yourself why you have never heard of the "Dancing Israelis"?

I am Dianna Ploss, Independent Candidate for Governor of Massachusetts 2022, and I approve this message.
N/A by N/A is licensed under N/A N/A

If you tell the truth, they will come...