It's Selection, Not Election 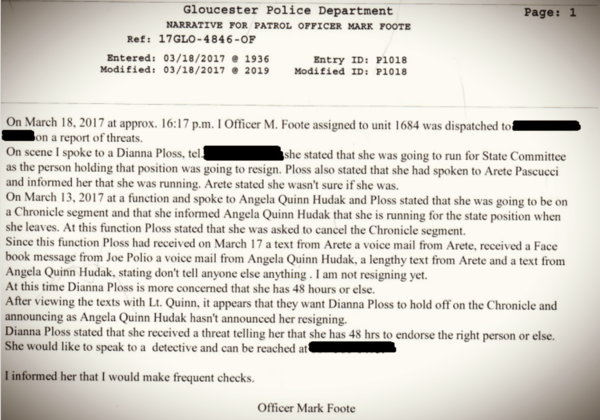 edit of Gloucester_Massachusetts_Police_Report_3-18-17 by screenshot is licensed under N/A N/A
Last week, I spoke with a friend of mine who also lives here in Massachusetts.  A great person and Patriot!  Someone who would be a terrific representative of 'We The People'!  This person would like to run for office here in 2022 and wanted to run it by me.  My very short answer was, "Do NOT Bother. The Fix Is In."  And, their answer was, "What?!?!?!"

Yup.  Do not bother to run for office in Massachusetts.  It's a waste of time, money and energy, and you will get none of that back.  Plus, you ARE going to lose.  Frankly, my opinion is that all the other states are rigging their elections, too.  This became crystal clear during the November 2020 Presidential Election, when the election of President Trump was stolen right out from under us.  The elections are rigged from stem to stern, top to bottom, east to west.

Now, you can imagine the shock of my friend, who asked me, "What?  Are you giving up?"  Nope, I replied.  There are many roads that lead to victory.  It's just that right now, running for office is not one of them.  If the election system is not fixed, running for office is like spitting into the wind.  Personally, I would rather keep the spittle off of my face!

My friend and I bantered back-and-forth.  Well, they mostly listened and I just bantered.  So, allow me to continue...

Every person with a government job, from the clerk in the Town Hall, the Policeman on the beat, the Mayors, etc answers to the Political Establishment.  All of them.  These people do NOT answer to you.  Think about it.  Wouldn't you be loyal to the person who gave YOU a job?  Of course, you would!  And, along with cushy state jobs, you get great benefits and a plush pension.  Would you ever want to leave a state job?  Nope.

Additionally, when it comes to agencies that are supposed to "protect" 'We the People', those agencies are also run by people anointed by the Political Establishment.  You know the players.  They DO NOT want outsiders coming in and messing up their opulent gigs.  Again, would you?

The Political Establishment wants people like them.  They want people who will LIE, CHEAT and STEAL in order to keep the game going.  It's designed this way.  No amount of "term limit" rantings or, "I have the best platform evah" bellowings will change this.  It will NOT.  Think about it.  They DO NOT WANT Freedom loving Candidates.  If they did, the Communists wouldn't be nipping at our toes right now!

Furthermore, I have personally been involved in a rigged election.  In 2017, I ran for a position on the MassGOP State Committee. From the top to the bottom, they put me through the ringer.  I was threatened and defamed.  I was so scared, I reported it to the Gloucester Police (See Police Report picture).

I could have pursued charges against Arete Pascucci for leaving me a threatening voicemail.  Yet, I was afraid to do that.  But, that was then.  This is now.  I am no longer afraid.

Even Charlie Baker's former attorney and lobbyist, Vincent DeVito, was involved.  All of them pulled the strings for the person they wanted: Amanda Orlando Kesterson.

Not only was I threatened, I was defamed.  And, the entire lot of them carried on an elaborate scheme, pretending that Angela Quinn Hudak still lived in Massachusetts, when in fact, she had moved out of state.  Angela Quinn Hudak even flew up to Massachusetts so that she could attend events in order to keep the charade going.  It's all true.

I am sure you are asking why they would do this.  It's simple: They were trying to delay the election so that Amanda Orlando Kesterson could make the rounds to all of the Republican Committees in the district.

Here are some of the known Conspirators:

- Angela Quinn Hudak.  MassGOP State Committee Woman, who had moved out of state.
- Arete Pascucci.  She lives in Middleton.  Worked on the Trump 2016 & 2020 Campaigns in NH.  Boasts that she has "over 30 years in Politics."
- Chanel Prunier.  Previous MassGOP National Committee Woman.  At the time, she was the Leader of Renew Massachusetts Coalition.
- Luke Noble. MassGOP State Committeeman. He defamed me.
- Amanda Orlando Kesterson.  At the time, she was Chair of the Gloucester RCC.  Her family hosts Charlie Baker fundraisers at their home in Gloucester (Probably just a coincidence).  Her father, Joe Orlando, Sr, tried bullying me at a Gloucester RCC meeting.  It didn't work, did it Joe?
- Kirsten Hughes.  MassGOP Chair. Never responded to my certified letters to her.

If you want to take a trip down memory lane, here are two of the news articles that were written about this in 2017:
You don't believe me?  Contact these people yourself.  Ask them why they did this.  Bet you will get one of two responses:
Number 1 could be true.  But, that doesn't make me wrong.  Number 2 is just what it is:  NUMBER 2!

So, no.  Do not bother.  You are wasting your time by running for office here in Massachusetts.  Better to spend that time fighting back in a manner that you will at least have a modicum of control.  I have a plan.  I know what I am doing.  I also know that there is more than one way to drain the Political Establishment Swamp.  Stay tuned...

Support Dianna Today!
edit of Gloucester_Massachusetts_Police_Report_3-18-17 by screenshot is licensed under N/A N/A