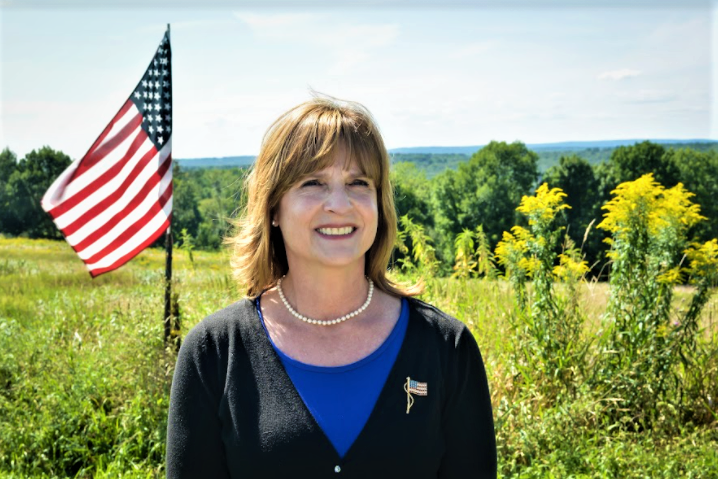 Campaign Announcement 8-2021 by N/A is licensed under N/A N/A
God has the predominant seat at Our Massachusetts’ table.

Our Constitutional Republic was founded on Christian principles and the belief “that all men are created equal, that they are endowed by their Creator with certain unalienable Rights, that among these are Life, Liberty and the pursuit of Happiness.”

God is Our Creator.  Our rights come from God.  Our rights DO NOT come from the People in our Government, and that includes me.  Please.  Find your way back to God.

2nd Amendment
We are living during an unprecedented time in Massachusetts’ history.  Our Government, especially at the town and city level across our state, has become Tyrannical.  Elected Officials behave like Dictators, imposing their will on ‘We the People.’  Therefore, this is why the 2nd Amendment is so important!  The Government MUST fear the People in order for Freedom to prevail!

Right now, in Massachusetts, the only thing separating ‘We the People’ from a complete Tyrannical takeover, is “Our God-given right to bear arms which allows us the ability to protect Ourselves and Our Families” from these Tyrants.

Starting on Day 1 in office, I will review and pardon as many people as humanly possible, whose God-given right to bear arms has been taken away from them for such offenses as assault and battery, DUI, possession of drugs, etc.

I will also investigate every possibility, even via Executive Order, of making Massachusetts an ‘Open Carry State with Reciprocity.’

Right now, there is no option for you other than to take a firearms safety class and get a License to Carry.  Please do this as soon as possible.  Have your family and friends do this, too.

1st Amendment
No speech should ever be off limits, including perceived “hate speech”, which is nonsense.  Offend everyone.  That said, this does NOT include harassing and/or threatening to physically harm or kill someone.

I have said this before and I will say this again, words MUST NEVER be regulated by the government.  On the other hand, actions/behavior, including harassing and/or threatening to physically harm or kill someone, can be curtailed, and punished by our laws.

Abortion
Life begins at conception and zero tax-payer dollars will be used for abortion services. Period.

Children
Your children are in danger. The Tyrants in Our Government wish to indoctrinate them to be the 'Future Social Justice Soldiers' of the future.

The Tyrants in Our Government also plan to forcefully inject your children with the Biological Weapon known as the “Covid-19 vaccine."

Please do whatever you can to protect your children.  Keep them close.  Find a way to homeschool them.  If possible, move them out-of-state while we fight this war.

And, for those of you pushing the false narrative that, "People have a choice"...  You are wrong.  People only have a choice when they are fully informed of ALL the facts.  This has NOT happened.  Tens of thousands of Americans have died from these Biological Weapon injections.  Hundreds of thousands of Americans have been injured and maimed for life.

Please work with me to stop the lawless and unconstitutional Covid-19 mandates NOW!

Education
I will form and personally choose a task force of school-age Parents from across Massachusetts (one Parent from every town and city), who are NOT connected to any interest/lobbying group. Together, we will work towards ensuring that tax money for Public Schools follows the child/children, especially if the Parents choose to homeschool.

Gender
There are only two genders – male and female.

And, you MUST seek legal guidance before homeschooling.  It is not a good idea to give our Tyrannical Government an opportunity to remove your children from your home.  The Department of Children and Families (DCF) are now jabbing all children in their care from the age of 5 and up.

Illegal Aliens
If you are in Massachusetts ILLEGALLY, YOU WILL BE DEPORTED!

Immigration
Toughen immigration laws and requirements to enter the United States. You MUST be able to speak English before your citizenship will ever be considered.  You must have a sponsor and you must be able to financially support yourself, including education, healthcare, etc.

Language
English will be the official language of YOUR Massachusetts Government.  You WILL NO LONGER “Press 1 for English.”

If someone requires translator services, they MUST provide and pay for it themselves. Period!

National Governors Association (NGA)
I will never be a member of this treasonous organization.

Prison System
Review and Reform for all People.  The prison system is a business.  Evil, corrupt and soulless individuals are profiting from those who are incarcerated.  Not on my watch!

Subversive Groups
There are many subversive groups in Massachusetts undermining Our State and United States Constitutions, and Our Bill of Rights.  These groups include, but are not limited to, Antifa, Black Lives Matter, Chinese Progressive Association, Revolutionary Communist Party USA (aka Refuse Fascism), the MassGOP, and many others, including those hiding their subversive ideals behind religion.

Taxes
‘We the People’ should never be taxed on used items including cars, homes, furniture, etc.  Reasonable taxes may be applied to new products only. Please work with me to make this a reality.

United Nations
Ban the United Nations and all their entities from Massachusetts soil.  On my first day in office, I will stop the advancement of Agenda 2030, abolish the ‘Human Rights Commissions’ in towns and cities across Massachusetts, and put an immediate end to the Refugee Resettlement program in Massachusetts.

Voting
The 2020 Presidential Election opened our eyes to the widespread election fraud in towns, cities, and states across America.  Yes.  The 2020 Election was stolen from ‘We the People’ and from President Donald J. Trump.

Legislators will NEVER do it.

The Massachusetts Republican Party will NEVER do it.

YOU MUST DO IT AND DO IT NOW!  Your children and grandchildren are counting on you.

I am Dianna Ploss. I stand by what I say, and I approve this message.