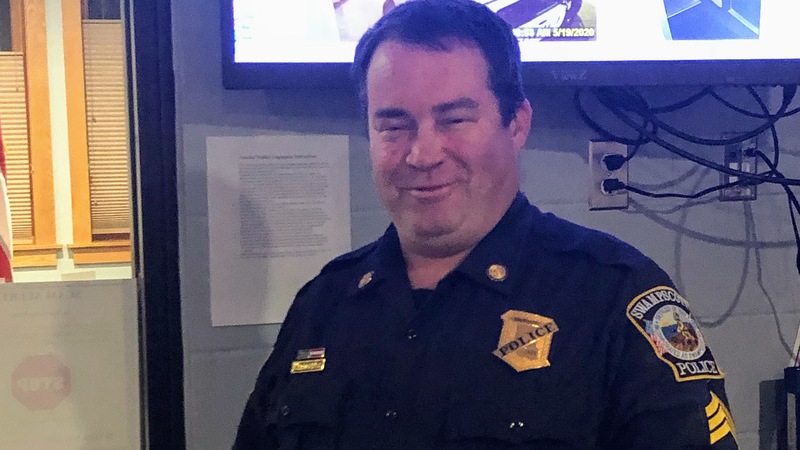 I was personally targeted.  It was a pre-meditated attack.  I was harassed, intimidated, defamed, slandered, and libeled by members of the Communist Group, Refuse Fascism: Out Now. Their goal is to intimidate me into abandoning my weekly, Swampscott Freedom Rally.

Sergeant MacDonald stated, "This is First Amendment. Talk with your Attorney."

When I challenged him, Sergeant MacDonald went on to say, "You're gonna have to go above me" and "I'm deferring to my Superiors."

You can watch how Sergeant MacDonald backs away from upholding the law:

This is THE perfect example of how the Government works.

Government Employees protect one another.

Government Employees DO NOT protect the Citizenry.

"Protect and Serve" is a bunch of garbage!

The Police are the Army for those in Power. They are the Foot Soldiers hired to keep us Peasants in line.

Don't believe me?  Read the law for yourself...

"Whoever willfully and maliciously engages in a knowing pattern of conduct or series of acts over a period of time directed at a specific person, which seriously alarms that person and would cause a reasonable person to suffer substantial emotional distress, shall be guilty of the crime of criminal harassment and shall be punished by imprisonment in a house of correction for not more than 21/2 years or by a fine of not more than $1,000, or by both such fine and imprisonment. The conduct or acts described in this paragraph shall include, but not be limited to, conduct or acts conducted by mail or by use of a telephonic or telecommunication device or electronic communication device including, but not limited to, any device that transfers signs, signals, writing, images, sounds, data or intelligence of any nature transmitted in whole or in part by a wire, radio, electromagnetic, photo-electronic or photo-optical system, including, but not limited to, electronic mail, internet communications, instant messages or facsimile communications."

When it comes to the Enemy, your silence is Compliance.

Stand Up for Freedom now, before it's too late...!