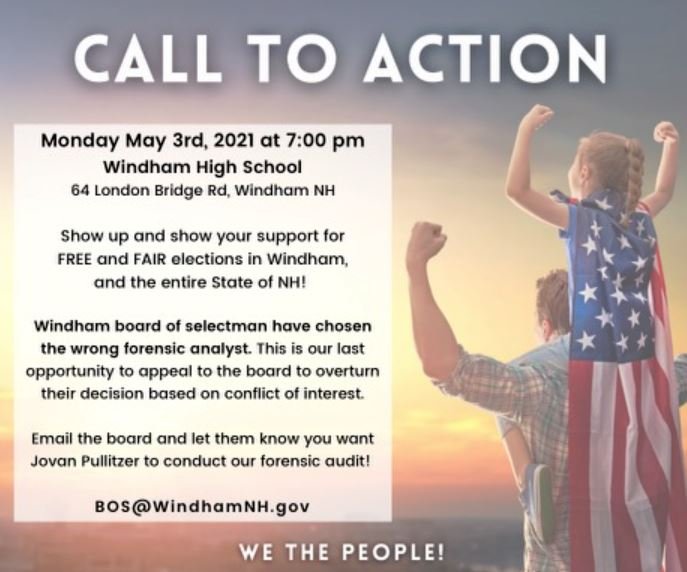 Windham NH by N/A is licensed under N/A N/A
The 2020 Presidential Election was stolen.  You know it.  I know it.  The People in Windham, NH know it.  They are fighting back and could use your help!

After an automatic recount of the Windham, NH 2020 election, it was discovered that the four Republican NH State Representatives had each been shorted ~ 300 votes.  The Democrats had some issues, but on a much smaller scale.

You can read the full story here:

This led to the crafting, filing, passing and signing of SB 43, which authorizes an audit of how the votes were counted in the 2020 Windham, NH election.

You can read the story here:

The problem now is the choice of the Auditor.  The Windham Board of Selectmen voted 3 to 1 for Mark Lindeman to represent Windham in the forensic audit of the 2020 election, despite the fact that Lindeman tried to stop audits and recounts in Arizona.

You can read the story here:

Yet, the People of Windham "want Jovan Pulitzer to conduct the forensic audit."  That's where you come in...

Jovan Pulitzer is an "Award-Winning Inventor, a highly active technology start-up founder, and his patents have been licensed to more than 330 companies."  You can read his complete bio here: https://jovanhuttonpulitzer.org/.

The Board of Selectmen email is:
BOS@WindhamNH.gov

Thank you for fighting for FREE and FAIR elections!