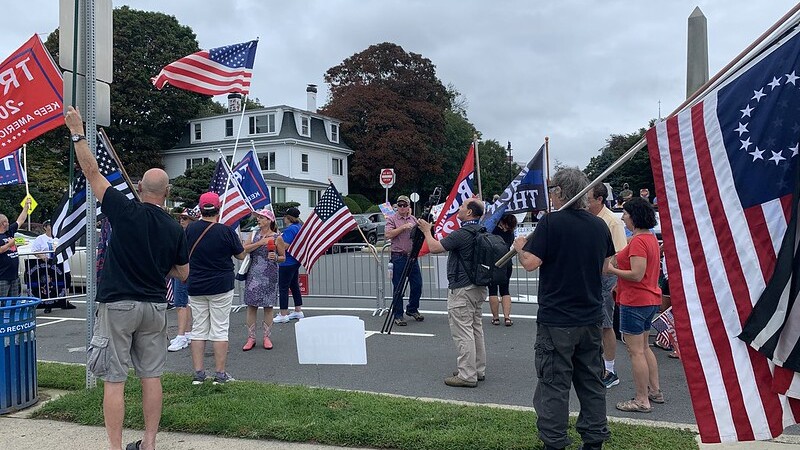 event by N/A is licensed under n/a n/a
Twenty-four weeks, a group of MAGA-chusetts Patriots began standing out in front of the Swampscott MA home of MassGOP Governor, Char-LIE Baker, to get him to re-open the state.  After four fruitless weeks and with dwindling numbers, I made the decision to move our group and change direction.  Who knew that the Commies and Anarchists would come out of the woodwork!

Our new location, 100 yards from Char-LIE’s front door, is now at King’s Beach in Swampscott, every Thursday, 10am to noon, rain or shine. Our new direction is Standing Out for President Trump and Backing the Men & Women in Blue. Our group is now HUGE and growing every week. Guess, that’s why Char-LIE Baker had to call in his ‘Burn Loot Murder’ reinforcements 😊

It is difficult to keep track, so I will say that about six to eight weeks ago, BLM, or as I like to call them, “Burn Loot Murder”, starting to show up. They planted themselves directly across the street from our location. First, there were just a few. Then, their numbers grew. One day, their numbers were more than ours. Yet, that did not last long!

Shortly after the ‘Burn Loot Murder’ gang started to feel comfortable in their Thursday morning home, one of their members, Tom (I have yet to obtain his last name), decided he was going to stand across the street with us.  He appears to be in his 60’s, is tall and thin, wears a cowboy hat, and describes himself as a “maniac”.

That day, Tom assaulted Andy, a member of our group. Andy is also in his 60’s, a Veteran, shorter than Tom, but more robust. The Police were called. Yet, Andy declined to press charges, despite our many attempts to get him to change his mind.

Fast forward to Thursday, September 17, 2020… I arrived in Swampscott at 9am. At the time, there was only one other member of our group present. I noticed that Lauren was across the street, handing ‘Burn Loot Murder’ signs. The only other ‘Burn Loot Murder’ member there was Tom. Of note, I had forgotten that Tom was the person who had assaulted Andy.

Something struck me, as I watched Lauren hanging signs and laying them on the ground, Lauren is doing all the work for this group. She supplies the materials and makes all the signs, which she brings to Swampscott each week. The other people just show up. They stand in front of a Lauren-made sign or pick up one from the ground. This gives the appearance that this is a group effort, when in fact it is not. It is a ruse!  A sham! We had been duped!

I decided to live stream this so that more people would know. They should know because how many other ‘Burn Loot Murder’ Leaders are pulling off this deception?  Remember the pallets of bricks showing up in cities just before an evening riot?

You should know that when Lauren first started showing up in Swampscott, I was told by a member of our group, that the woman passing out the ‘Burn Loot Murder’ signs was “very nice” and possibly a “Minister”.  It turns out that this “nice Minister” is neither nice nor a Minister. Her name is Lauren Noyes, a self-described “Badass. Advocate for Immigrants and Squasher of the Haters.”  She is also a LIAR!

I began live streaming and walked over to the ‘Burn Loot Murder’ side. Approaching Lauren, I started to ask her if “she belonged to a church.” She responded by telling me she would “speak to me when I have a mask on.” My goodness!  Lauren even offered me one of her masks from a plastic container filled with them.  What a generous Commie!

Not sure who called the Swampscott Police because they arrived moments after Tom’s assault of me. I told the responding Police Officer, “That man assaulted me, the guy in the hat.”

Lauren told the Police Officer who arrived on the scene that, “she (referring to me) came over and pushed against him.”  Huh?  That is not what happened.  Clearly, Commies have no problem lying.

Unfortunately, I had to end the live stream in order to show the Police Officer the video, where it clearly shows that Tom came after me.

A few hours later, I did receive a voicemail message from a Swampscott Police Officer informing me that Tom had been formally charged with assault and battery. I have requested that Swampscott Police report. As of this writing, I have not yet received it.

This story has no ending. It will never have an ending. If America continues to be a Constitutional Republic, our enemies will continue trying to bring her down. Therefore, we must remain vigilant…. Forever!

You can watch the 11 minute 34 second video here.